Noisy samples are often far from inliers of the same class in the input (image) space.

Existing robust deep learning approaches can be grouped into two categories depending whether human supervision/verification of noise is required. 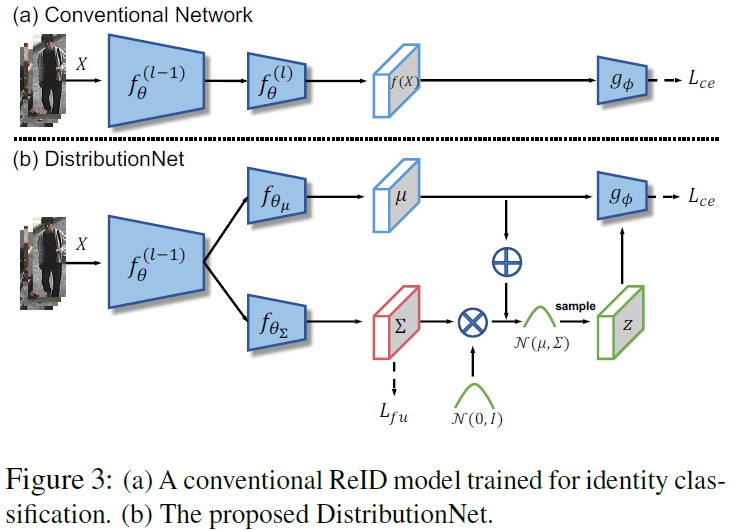 We propose to explicitly model the feature distribution of an individual image as Gaussian, i.e., we assume the feature vector of an image is drawn from a Gaussian distribution parametrised.

Given a noisy training sample, instead of forcing it to be closer to other inliers of the same class, DistributionNet computes a large variance, indicating that it is uncertain about what feature values should be assigned to the sample.

Together with the supervised loss, they help the model identify noisy training samples, discount them/mitigate the negative impact of the noisy samples by assigning large variances and focus more on the clean inliers rather than overfitting to noisy samples, resulting in better class separability and better generalisation to test data.

Why large variances for noisy samples

First, we need to understand what the supervised classification loss $L_{ce}$ wants: samples with large variances will lead to large loss values of $L_{ce}$; it is also noted that samples with wrong labels or outlying also have the same effect because they are normally far away from the class centres and the clean inliers.

Second, we explained that with the feature uncertainty loss $L_{fu}$, the model cannot simply satisfy $L_{ce}$ by reducing the variance of every sample to zero – the overall variance/uncertainty level has to be maintained.

So who will get the large variance?

Now the decision is clear: reducing variances of noisy samples would still lead to large $L_{ce}$, whilst reducing those of clean inliers will have a direct impact of reducing $L_{ce}$; the model therefore allocates large variance to noisy samples.

Why samples with larger variance contribute less for model training

The reason is intuitive – if an image embedding has a large variance, when it is sampled, the outcome $z$ will be far away from its original point (the mean vector $\mu$) but with the same class label. So when several diverse $z^{(1)}, z^{(2)}, …, z^{(N)}$ and $\mu$ are fed to the classifier, it is likely that their gradients will cancel each other out.

On the other hand, when a sample has a small variance, all $z^{(j)}$ will be close to $\mu$; feeding these to the classifier gives consistent gradients thus reinforcing the importance of the sample.

The variance/uncertainty thus provides a mechanism for DistributionNet to give more/less importance to different training samples. Since noisy samples are given large variance, their contribution to model training is reduced, resulting in a better feature embedding space.